The Ruins of Corfe Castle | Selection

To the artist Paul Nash, writing his Shell Guide to Dorset in the 1930s, ‘Corfe is probably the finest example of a ruin we can show in England, and that is saying much’. It has been painted by artists as good as Nash and J M W Turner, by distinguished topographical draughtsmen such as Samuel Hieronymous Grimm and Samuel and Nathanial Buck, and by many more forgotten figures such as P. Brannon, H. J. Moule, and the amateur Thomas Weld. Jeremy Gardiner’s Corfe Castle series, in my personal view, is the finest work of art inspired by the ruins of Corfe; certainly, no artist has tried so hard to capture the experience of the site or been so imaginative in his presentation to an audience. Over a period of several years Gardiner has illuminated the colours and transparency of the ruined walls, in addition to recording how their appearance changes with the time of the day, the seasons, and the weather – and, indeed, the memories he has accumulated in a life-long relationship with the castle.

The basis for these paintings are handmade paper collages which are a response to the texture of the ruined stone walls and their changing reflections of light. Inside his studio, Gardiner sands the paper applying many layers of stained pigment, chalk and translucent washes. When it was built the Castle keep was white-washed, a dazzling assertion of royal authority in a panorama of grass, mud, and thatch. In three centuries of dereliction it has become mottled with lichens, flowers, ivy, and earth. Pick up a photographic postcard of the castle and you will see a single colour to the stone; next time you visit, however, compare the colour of a flat, south-facing surface of the keep which still glitters with the traces of white-wash to that of a grey, damp corner of herring-bone masonry. In actuality, the ruin is a multiplicity of variegated colours and textures, a patchwork from which Gardiner has selected the colours we see in this exhibition.

I was immediately reminded of John Piper’s interpretation of ruins. An exhibition at Dulwich Picture Gallery earlier this spring explained the relationship between his experimental abstractions of the 1930s and the figurative paintings of later decades which we immediately recognise as much-loved ‘Pipers’. Although he soon abandoned abstraction as a style, it taught him how to use colour for symbolic and emotional effect. As a Government War Artist he was instructed to paint bomb-sites hours after the Luftwaffe had struck. Depressed by the overwhelming greyness of the reality of destruction, he searched for colours which seemed to represent an inner spirit and intensified these – the flickers of red, or yellow fragments of decorative plaster of an old church – in his depiction on canvas. It was this abstraction and intensification of colour which gave his masterpieces of the war years their spiritual intensity.

The new colours and textures represented by Gardiner are one element in the ruin’s fertile dialogue with Nature. White-washed and intact, its walls defied the patination of age; standing high and alone on its artificial plinth, the Castle was a deliberate imposition on the landscape. In ruins, it has a more fertile – and vulnerable – relationship. Its walls are now as inseparable from the landscape as the splintered and petrified timbers of a boat abandoned in the sand; indeed, in certain lights the castle seems to be sinking gently into the hillside. But perhaps the greatest change is the sudden transparency of the building. Entering the courtyards or the Keep, are we inside or outside?

The most dramatic consequence of the explosion of Corfe Castle by Cromwell’s engineers was, of course, the creation of a new plan and silhouette which has no relationship to the intentions of its original architects. Many of these fragments are inexplicable, even if we stand on the site with the National Trust guidebook and study the reproduction of Ralph Treswell survey of the 1570s. The towers at the entrance gate lurch drunkenly outwards; the single rectangular block of the Keep has become two separate upright walls of miraculous verticality and as we climb the last few paces we are confronted by tumbled, vast, unrecognisable chunks of masonry, as shapeless as blocks of stone in a modern quarry. How does an artist capture this exploded form on a flat sheet of paper or canvas?

The majority of artists – such as the antiquarian brothers, Samuel and Nathaniel Buck – recorded its silhouette from a distance, choosing a perspective which allowed them to encompass the mound and the outer wall within a single frame of vision. Several other artists chose vignettes of the interior, preferring to be atmospheric rather than informative; for example, Grimm’s pen and ink sketch of the arches of the undercroft of the Gloriette made in the autumn of 1790. Gardiner is one of many artists to have recognised that it requires a multiplicity of viewpoints to capture a castle.

Seeing the number of painted studies in his studio I was reminded of French artist Francois-Marius Granet (1775 – 1849) and the Colosseum. Granet, a native of Aix-en-Provence, travelled to Rome in 1802 and in the years that followed made hundreds of sketches of the arena. In his first few weeks he tried to paint an overall view of the structure from an adjacent hill but it was beyond the young student; an older artist advised him to begin by drawing the Temple of Minerva Medici. This circular, open Roman ruin posed the same challenges on a smaller scale: how to relate inside and outside, combine light and shadow, and adjust to dizzying changes in the point of view. Granet returned to the Colosseum and made hundreds of sketches in ink, pencil and oil in the next few years, but each was only a vignette of a small element of the vast arena, six acres in extent. He recorded the movement of light and shade in the corridors during the course of the day, its changing colour from season to season, and the variety of wild plants – more than 400 species – which had flourished in fifteen centuries of desolation.

What is the connection between Granet’s Colosseum  and Gardiner’s Corfe Castle?  Each has painted many small studies of the luminosity  distilled in old stone; more profoundly, each has recognised that a ruin of this scale can only be recorded as a collage of vignettes if it is to be a truthful record of the artist’s experience of the site rather than simply a postcard- view. In technical terms, Granet was more than competent enough to paint a view which encompassed the whole of the exterior of the structure and which could have been engraved as a print for sale to tourists. For spiritual reasons, however, he chose to return to France with a portfolio of sketches which he never exhibited in many years as a busy professional artist. Whenever he was under the grey skies of Paris and nostalgic for his years as a student in the ruins of Rome, these sketches – like pieces of a mental jigsaw – enabled him to reconstruct the Colosseum in his memory.

Gardiner’s Corfe is a piece of many moods. In the weightless luminosity of an early summer morning we think of the hours of sunshine shimmering ahead; in the dark hours the castle reclaims its sinister presence and we remember the stories of brutality, such as King John’s starvation of twenty-two French knights in its dungeon. That is what comes to my mind; more importantly, it is for each individual viewer to choose. A ruin is not an open air Museum; it is a place for the imagination to run free. 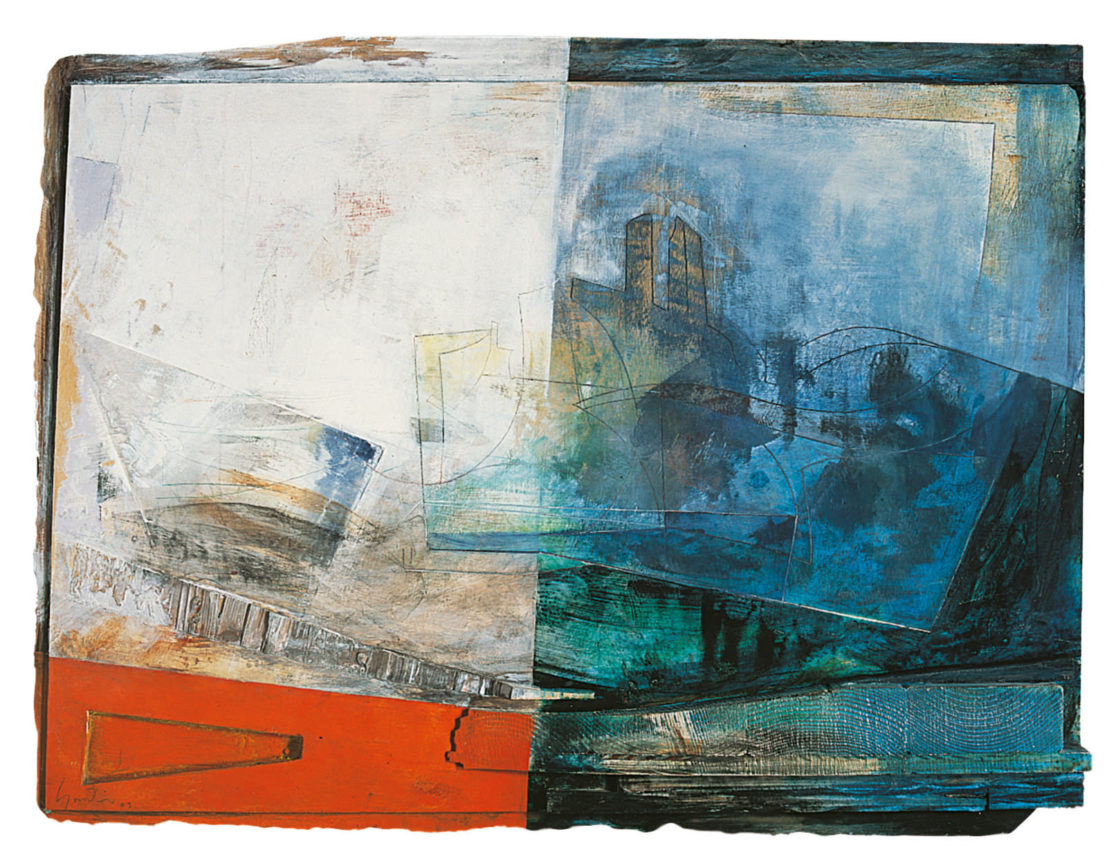 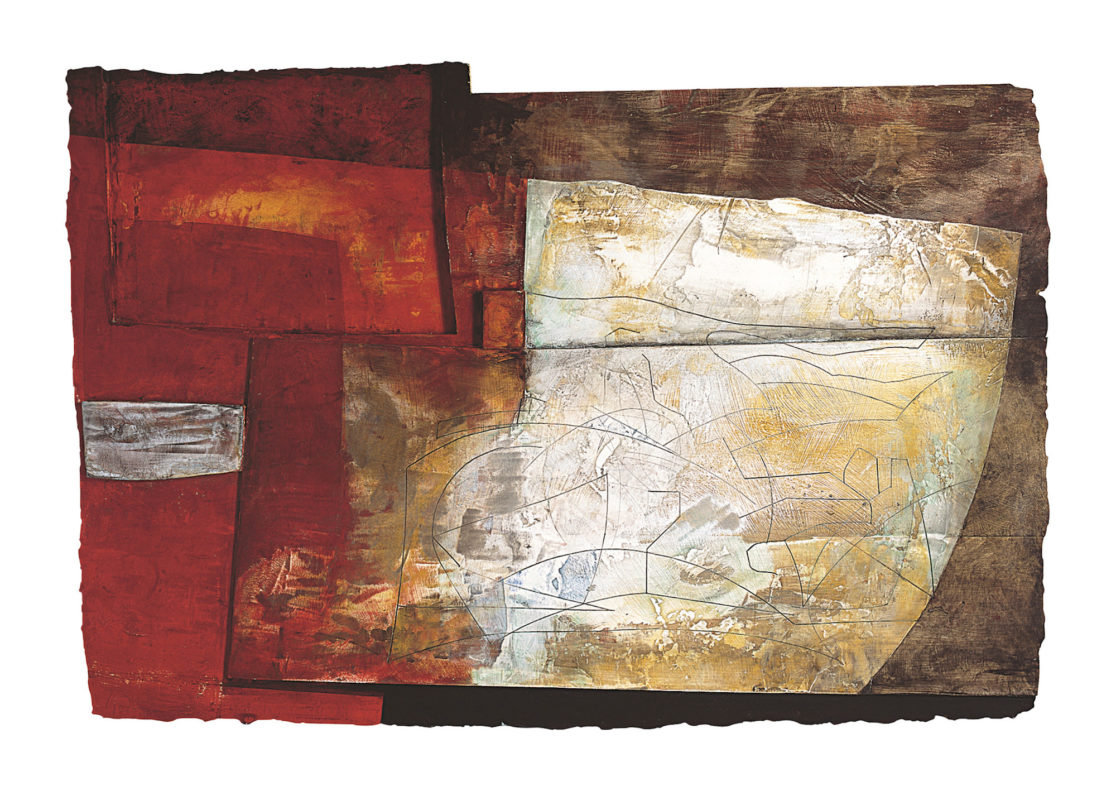 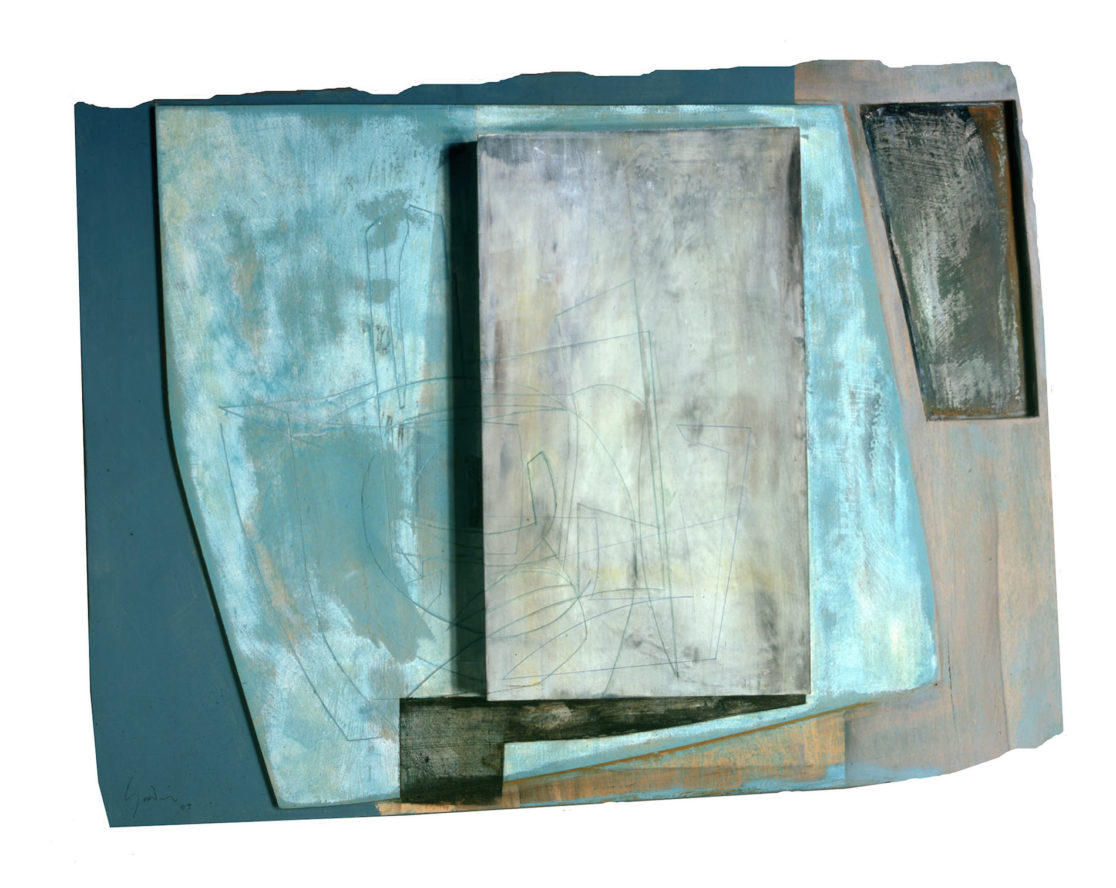 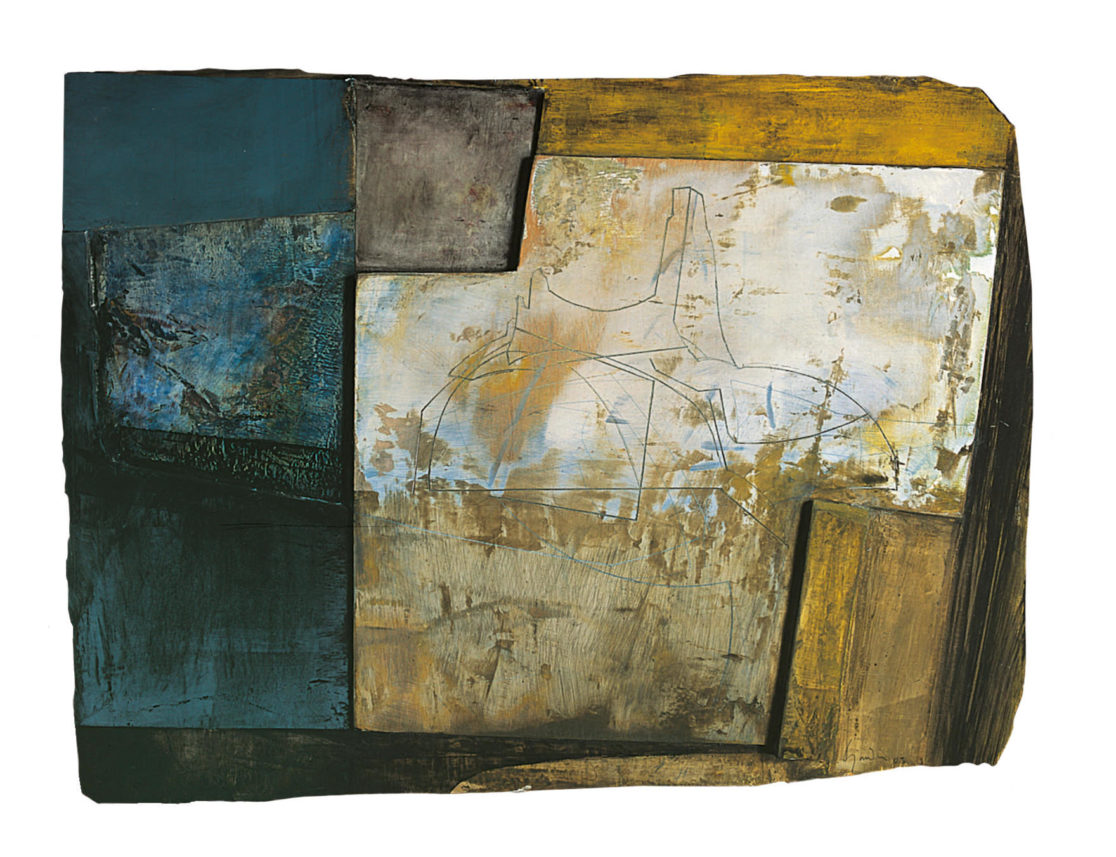 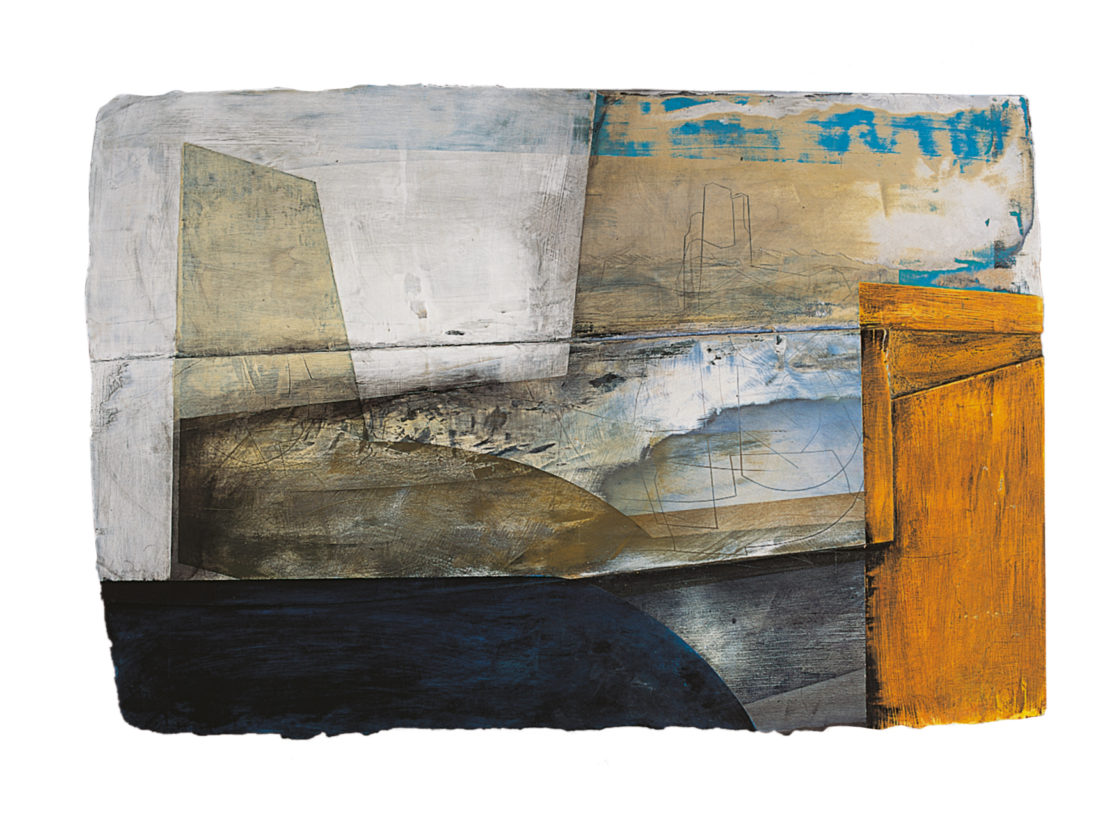